As I typed this latest instalment of pinchmyself in downtown Phnom Penh, I looked out the window just in time to see a man throw a large machete up a palm tree toward his co-worker.

I gasped and held my breath as the young man about 10 metres up the tree managed to reach out and catch the knife.

He tucked it into the waistband of his trousers before casually continuing his progress upwards to prune the tree.

He had dropped the tool as he shimmied up the trunk of the palm and scarily, it seems that both he and his colleague thought it was more convenient to throw the knife, than to have him come all the way back down the tree to collect it.

Thankfully there was no harm done.

When you’re in the developing world, things don’t always happen exactly as you might expect.

Despite my best-laid plans, this applies directly to my current visit.

Fortunately, ‘going with the flow’ has become a bit of a mantra for me this year as I navigate all sorts of previously uncharted personal territory after being made redundant in April.

We can’t always control what happens to us, but we can we can control our own expectations about what should happen and we can then manage how we respond to what does happen.

It’s also refreshing after years in the corporate world to have the freedom to be less fixated on specific outcomes and more focused on enjoying the journey.

That mindset can come in handy in the developing world. A degree of flexibility, an open mind and sensitivity to other cultures go a long way.

It reminds me of experiences I had working as a journalist in the mid-1990s in the remote North-West of Western Australia.

I once drove 21 hours across the Pilbara and Kimberley regions to interview a key person about the outcome of a landmark court case. I got there only to find that as a result of unforeseen circumstances while I was in transit, the man was no longer available.

Other times, I had to juggle deadlines and a chief of staff breathing down my neck as I navigated what was known locally back then as ‘Kimberley time.’ That’s the fluid sense of time-keeping which meant that sometimes people could be hours, and occasionally even days, late for things.

It calls upon you to be more patient and adaptable in order to get the job done, and while it can be frustrating, it’s not all bad. There’s something quite natural about a life that’s less dictated by clocks, schedules and deadlines – as I’ve been enjoying in recent months.

Having said all that, this visit to Cambodia carried the most expectations for me out of all the travel I’ve done in recent months.

I had never been to Spain or Mauritius before, so in some ways I didn’t know what to expect. By comparison, I’ve been to Cambodia four times before and I had a specific purpose for coming back.

I’ve come to do skilled volunteering for a local non-government organisation and I specifically want to contribute to the important work being done here to support and protect women and children.

Things haven’t worked out quite as planned because, due to unforeseen circumstances, they haven’t been ready for me to get fully started.

I’ve been meeting with people and getting my head around the organization and the issues, and providing some input, but the organisation is in a bit of a holding pattern at the moment.

To date there’s been a fair bit of them managing my expectations and me trying to manage their expectations. But for the time being at least, I’m still going with the flow. 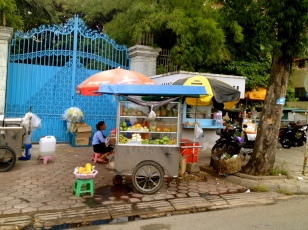 A woman having breakfast on her way to work at one of the street-side stalls in Phnom Penh.

Tuk tuks come in all colours and conditions. The pink curtains on this one catch the eye. 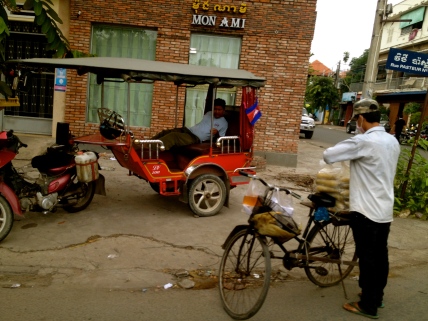 In between jobs, you often see the tuk tuk drivers taking a little nap beside the road.

Kids are the same the world over. Give them a few sticks and they will create a game.

In typical Cambodian spirit, this shop seems to be carrying on with business as usual despite the fact the street and drains in front are all ripped up.

An open-air spot to do the dishes in downtown Phnom Penh.

This little girl called out to me and the Dad gave me the ok to take their photo as they followed behind my tuk tuk.

This colourful stall selling kites caught my eye on the way through. 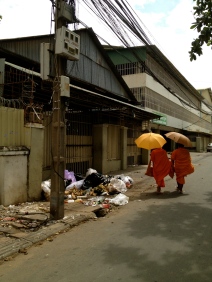 I hesitated about including this shot because it’s not the most flattering image of Phnom Penh, but it is the reality of what you will see in some streets.