There was a beautiful moment in the tapas bar which is reputed to be Seville’s oldest – a bar called El Rinconcillo, established in 1670.

Typical of tapas bars, you graze from your small plates standing up, while enjoying a cold Cerveza or Sangria.

Our group of eight women has been turning heads everywhere we have been. In many ways we’re an unlikely-looking group of travelling companions because of the huge diversity in ages and personal styles, but it’s working well for us so far.

On the three and a half hour train ride from Granada to Seville, the conductor stopped to check our tickets and as she produced them, our tour leader indicated to the two rows beside and behind her and said: “ocho chicas” or eight girls.

The conductor’s eyes panned around the group, taking us all in. He then gave us an exaggerated look that could well have been a mixture of appreciation and intimidation. No translation required – the spontaneous moment earned laughter all round.

In Seville, we’ve been lucky enough to stay in the same street as the famous El Rinconcillo tapas bar so it was a natural place to stop for lunch.

It’s just around the corner from our new navigation point to our hotel. We’re all delighted to have replaced Granada’s ‘sex shop’ with a far more appropriate and dignified Spanish landmark – a beautiful old church.

Only one problem. There seems to be a beautiful old church on every second corner in Spain.

Inside El Rinconcillo, patrons gather around large wine barrels fashioned into tables and the tapas flows steadily from the kitchen onto barrel-tops, and into the mouths of patrons taking refuge from the hot streets of Seville.

The best thing about the bar was that it appeared to be well-frequented by locals and was not a tourist caricature of an old-fashioned tapas bar – of which we’ve seen many.

There appeared to be no surprise when the eight of us arrived en masse at El Rinconcillo and the reason for this quickly became apparent.

As our happy group of girls feasted on plates of juicy olives, lush chorizo, mussels, goat’s cheese, spinach and chickpeas, and fresh crusty bread, another all-woman group arrived and took their place at the barrel next to us.

But these were local ladies, a group of at least 10 of them in their 60s, 70s and possibly even 80s. All dressed immaculately, they were enjoying the same meal as we were.

Their laughter, conversation and a shared jug of Sangria were flowing just as they were at our barrel – establishing common ground between two groups of women born half a world apart.

We wonder out loud whether this is some sort of special occasion for our local counterparts? But our guide tells us this is a common thing for women to do – to get dressed up, head out and catch up with friends over tapas for lunch.

How beautiful then, for our group of Australian women to share this authentic moment with some women of Seville?

Of course, this is where we parted ways.

No doubt, they went home for siesta to escape the heat of the day – around 36C that day in the shade – perhaps rightly thinking how crazy the tourists are to head out at this time on a walking tour of Seville. 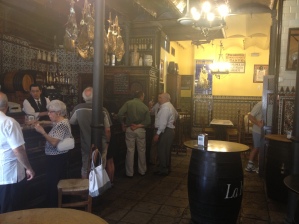 Cured hams hang from the ceiling in El Reconcillo

The Cathedral in Seville, which dates back to the late 1400s, is said to be the largest Gothic building in the world and the third largest church in Europe. 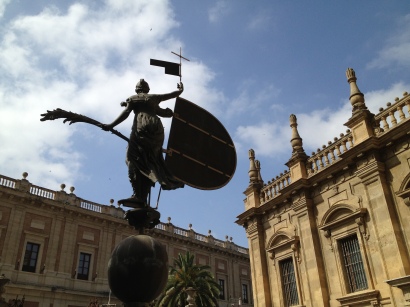 Statue at the Cathedral, Seville

Even the horses of Seville know to keep out of the afternoon heat. At the 14th century palace of Alcazar. 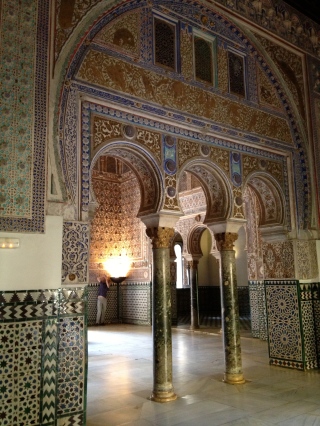 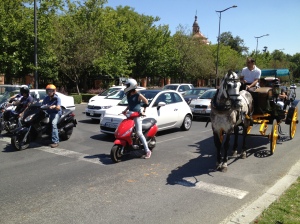 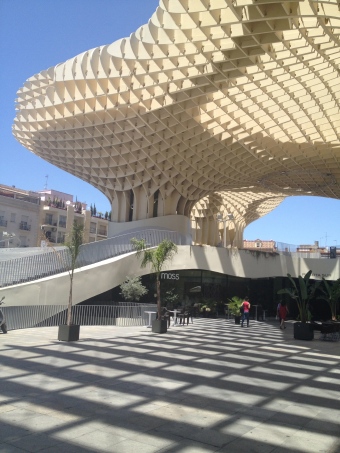 4 thoughts on “The bar of Seville”