I would have liked to have known my father when he was alive the way I’m getting to know him now, six years after he passed away.

When I set out to write his life story in late 2013, I started without doing any research and the stories just flowed out of me and onto the page. They were stories I recall Dad telling me throughout my childhood and again over the years since.

The plan for the book has since morphed from a daughter’s recollections of her father’s stories, to a work of creative non-fiction about aspects of his life.

This means that it will be more like a memoir than a straight biography, with some of the elements of a work of fiction: plot, setting, character development. Well, that’s the current plan.

This has meant going back to the beginning to revise the book’s structure and the research required.

This requires a lot of reaching back in time, to when Dad’s life started in the 1920s in Scotland, a period of transition from the horse to the motor car and from the kerosene lamp to electricity. From outside toilets and water heated on the stove for a bath, to the luxury of hot running water and toilets inside.

Then the World War II years. Life on the airbases in the United Kingdom and during the Battle of Britain, compared to his experiences during the monsoon in India and in the jungles on the border with Burma.

Next, his post-war life and emigration to Western Australia under the ’10 pound’ scheme with his first wife and two young kids.

All of this and more, prior to him meeting my Mum and starting a second family. Parts of his life I didn’t live through with him.

I’d had a window into that life through his stories, but now I am trying to paint a fuller picture. Seeking to truly understand his motivations and emotions. How did that make him feel? What did he do next and why? What evidence do I have to support that?

It’s a tremendous responsibility to write anyone’s life story, let alone to write about your father. That need to be respectful to his memory, yet faithful to the facts, as I’ve written about before.

As my work has progressed, I’ve had a number of ‘aha’ moments. There have been breakthroughs in my understanding about what happened and why. For example, why Dad seemed to dwell on some stories more repeatedly than others. Why those stories meant so much to him.

It does feel like I’m getting to know him more than ever and there are things that in hindsight I wish I could have talked to him about.

However, I couldn’t have written this book while Dad was still with us. We did ask him and after some consideration, he said there were too many painful memories for him to trawl back through his younger days. I respect that.

That’s meant some soul searching about whether he would be comfortable with what I’m doing with his story, not to mention how members of my family might feel.

Here are three insights based on my experiences that you may find useful if you’re contemplating writing about yourself or a member of your family:

1. Write your story. There will be plenty of time later to work out whether anything needs to be amended or cut altogether. Just focus on getting the first draft down on paper. You don’t need to make any decisions until you’ve written your story. Everything that needs to be considered, can be sorted out in the redrafting and editing.

2. Talk to your family. Some may be more willing to contribute than others, and that’s ok. You won’t know unless you start a conversation, so if this feels like something that’s right for you and your circumstances, give it a go. You may well find perspectives that are very different to your own and this will help give you a fuller picture. At the end of the day, it’s your story, but by talking to members of your family you can avoid surprises on either side later on and it’s likely they will bring valuable recollections and insights to your project.

3. Be prepared for change. It’s probably inevitable that your thinking and feelings will shift and evolve through the process of researching and writing about yourself or a loved one. The book I’m writing now is vastly different to the one I thought I was going to write. The process of writing has undoubtedly shifted my perspective on some things. I’ve also become more comfortable and confident to bring Dad’s story to life as I’ve progressed and as I’ve pursued points 1 and 2 above.

That’s not to say I don’t have days with doubts. There are plenty of those moments as a writer.

But as I ponder any hesitations, I’m reminded of something that Dad used to say when he saw a gravestone.

Dad believed that by reading the deceased person’s name out loud, it was as though you were keeping the memory of that person among the living. He thought they hadn’t been forgotten while ever there was someone to say their name out loud.

So Dad would walk through graveyards pausing respectfully to read people’s names out loud, bringing a memory of them back among the living, if only for that moment.

It’s a beautiful thought and one that gives me comfort as I delve back into Dad’s life and do my part to keep his memory among us. 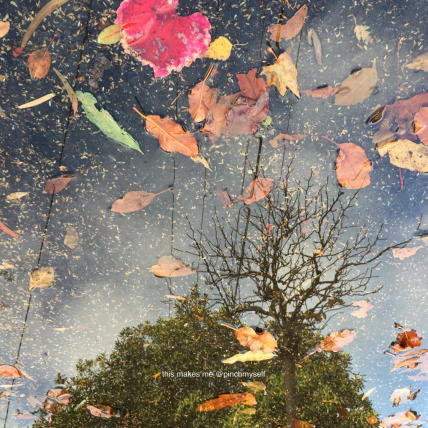 The MacRobertson bridge over the Yarra River, with sky reflected on water 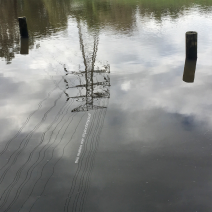 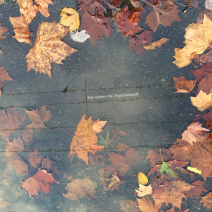 Autumn reflections in a puddle

Autumn reflections of a tree in the Yarra River, inverted image

Tree reflected on a pond 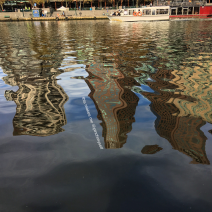 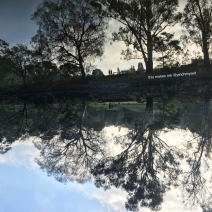 Reflections on the Yarra River on a misty morning, image inverted

Are you writing about memories that involve members of your family or other people you care about? What’s been your experiencing in researching their lives and motivations? How have you dealt with any doubts about exploring their story?