Sometimes you walk into a place and there’s an undeniable sense of it being a man’s or a woman’s domain.

That’s how it felt when we visited the house where my friend’s mother, Mrs C, was born in Mauritius. Men have lived here, but it’s been a significant place for women.

Perhaps my perspective had already been influenced by stories Mrs C had told us before we arrived at the pretty weatherboard cottage in the town of Rose Hill.

“This is a very significant house for my family,” Mrs C said. “Three generations of my family have been born and died here.”

We are greeted at the gate for this pre-arranged visit by the woman who currently lives in the house. She is kind enough to not only open her doors and welcome a dozen or so of our family group into her home, but in typical Mauritian hospitality, she also lays out morning tea while we chat.

Just as this house is significant to Mrs C’s family, it has become important in hers. She and her husband took it on some time ago from one of his elderly female relatives who had lived there for many years.

In this house, Mrs C was born the eldest child to her parents exactly 59 years and four days prior to our visit – then then home of her grandparents.

Five of her six younger siblings were also born in the house, with only her youngest brother born in hospital in the late 1960s because by then, the house had been sold.

She explains that it was the Mauritian way for women to return to the homes of their mothers to give birth, assisted by a midwife.

As we step inside the house as a group that includes Mrs C’s own four children, an emotional Mrs C and her sister Aunt MC start to recount memories of their birthplace and childhood home. Some happy, some sad.

The strongest memories seem to relate to rites of passage for members of her family. The births, deaths and marriages.

The most meaningful room in the house to her family is also one of the most unassuming. It’s a little room with a pitched roof and small bay window on the front porch where all the babies were born, including a number of their cousins.

The bedroom and the long hall seem smaller to Mrs C than they did to her as a child.

That hallway formed a dividing line down the centre of the house when her grandparents had bought half the house from her Great Aunt A.

Great Aunt A bought the house as a widow and Mrs C’s mother went to live with her as a four-year-old, initially to protect her from malaria and then as company for Great Aunt A, who had no children of her own.

When Mrs C’s Mum was 16, her Mum’s parents bought half the house and her Mum was finally reunited with her parents as they shared the house with Great Aunt A.

Mrs C’s mother was engaged while living at the house and left it as a bride, aged 24-years to live with her policeman husband.

Aunty MC remembers when Great Aunt A passed away at the house. Many people came to pay their respects in her final days. As was customary, when she died, she was laid out on a table in the house until she was buried the next day.

Sometime prior to that, Mrs C recalls vividly the day she thought her Mum might die in the house during a difficult labour.

“I remember when I was nine years old, Mum was in the room having (my sister),” she said. “I could hear Mum screaming and I was terrified.”

Mrs C sat with Great Aunt A, who was praying to a statue of the Virgin Mary.

“I went in and I didn’t care about the baby at that point, I just wanted to make sure that Mum was ok.

“So you can see in those days growing up, birth and death were just part of life. You weren’t shielded from it.”

As well as being born in the house, Mrs C and Aunty MC were sent here to board with their grandparents so that they could attend a good primary school. At that time, her father was posted to the police station in the town of Nouvelle France.

“We caught the bus every Friday after school and went to Nouvelle France for the weekend,” Mrs C said.

Their life in Rose Hill revolved around a short distance from the house. The school just down the road, the churches around the corner and the pastry shop across the road from the church where her grandmother would take her after Mass. One church, Notre Dame de Lourdes, was the place where her parents were married, where Great Aunt A’s funeral service was held, and where Mrs C took her first communion.

Returning as an adult, Mrs C has new sympathy for Aunty I, who gave up her bedroom every time a baby needed to be born.

Aunty I’s room is also somewhere where Mrs C and her sister would sneak in to play dress-ups with her clothes, shoes and make-up while their young adult Aunt I was out for the night. They rushed to put it all back when they knew she was coming home.

If Aunty I caught them in the act, she would pinch them on the arm and they would run howling for guaranteed protection to Great Aunt A’s side of the house.

With new perspective on what they put Aunty I through, Mrs C plans to invite her over for dinner to thank and acknowledge her when they are back in Melbourne.

This is Mrs C’s first trip back to Mauritius since she and her parents and siblings migrated to Australia in March 1973 – the year after her father retired.

It was her Dad’s final posting to Centre de Flacq when Mrs C was a teenager which meant that her path would cross with her future husband, Mr C.

Migrating to Australia to join her fiancée and start a new life together was another major rite of passage for Mrs C and her famiy.

“I’ve learned a lot from being a migrant,” Mrs C said. “I’m a better human being for the experience.”

This was going to be a picture of the sailing boat, but as it happens, the clouds were much more interesting!

The house where Mrs C and five of her six siblings were born in Rose Hill. The roof was black when they lived there.

This is the local hall in Rose Hill where the wedding reception was held when Mrs C’s parents got married. 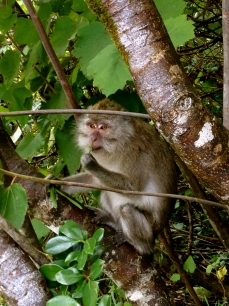 It was an amazing experience to come across this monkey in the wild in south of Mauritius.

The famous coloured earth at Chamarel in the south of Mauritius. The different colours of the earth (there are said to be seven distinct colours) are naturally-occuring and the dunes do not change, even after heavy rain. The phenomenon is understood to be caused by the metal elements in the soil.

This hill marks the most western point of Mauritius, which is in the south. We were told that former slaves hid out on the hill and refused to come down after slavery was abolished out of fear that it wasn’t true.

Out on the water at Pointe aux Pimants in the late afternoon sun.

Never tired of this view. The sun setting on a wonderful family visit to Mauritius.

7 thoughts on “A woman’s world”