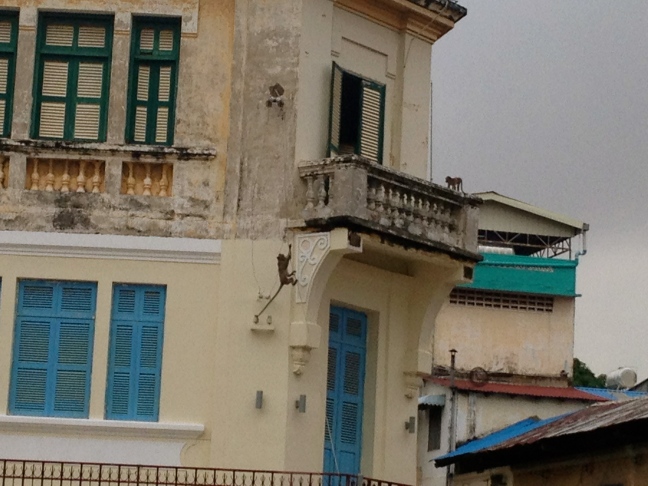 I’ve visited my fair share of religious buildings in my travels, but I’ve never seen anything like what I saw in Phnom Penh this week.

We walked through a laneway crowded with dark, cramped homes, with children playing, washing strung out on lines and motos parked against walls. Filled with the buzz of inner-city life.

If I hadn’t been told to look up, I might have passed through the area intent on all the activity at ground level and missed the real gem.

A glimpse upwards revealed that this was no ordinary urban lane. We were actually standing inside a historic Buddhist temple.

Built by Hokkien settlers in the 1930s, what’s left of the Jade Mountain Temple still has all the hallmarks of a traditional Chinese temple. The ornamental ridge caps, the slatted eaves, the gold-on-black lettering of the large ceiling plaques.

But in this case, the roof now provides shelter to a ramshackle series of huts and shacks. They have been built side-by-side and in some cases on top of each other so that they take up the space inside the temple and spill out the sides.

There’s another discovery to be made after just a few more turns in the alley, past a family bathing from buckets, a barking dog and a young girl heading out on her moto.

It’s another religious building, this time a Christian church, that has also been slowly consumed by the surrounding neighbourhood.

Built around 1920, the Sisters of Divine Providence church is more intact than its timber temple neighbour. However, other structures have been added to the outside of the church in a labyrinth of low-cost housing.

When you step inside the old church, there are a dozen or so dwellings inside. They’re makeshift but they’re not flimsy.

The distinctive arches of the original ceiling in the nave of the church are still visible above the shelters that have been added to the darkened space below using brick, timber and corrugated iron.

This occupation of the church is apparently more recent than the temple. The church has reportedly had a variety of purposes since the 1970s, from a Vietnamese community centre during that country’s occupation of Cambodia to an orphanage.

These aren’t the only buildings that have been occupied by squatters in Phnom Penh, but as religious buildings they are symbolic of the cultural destruction and religious persecution that took place during the murderous reign of the Khmer Rouge in the late 1970s.

When survivors flooded back into the capital city in the years after the fall of the regime in 1979 and after the departure of the Vietnamese a decade later, they occupied empty buildings, rooftops and anywhere they could find a piece of vacant land to set up home.

Some of these families have occupied these squats for decades and in some cases one or two generations may have been born there. It’s natural these families would come to consider these buildings their permanent homes.

Their legal status seems less clear and cases of compulsory land acquisitions, and the forced evictions of people have been a lightning rod issue between human rights advocates and the government.

These squat homes also present an interesting question for the preservation of Phnom Penh history.

It may not be the city’s prettiest chapter, but the history of these squatters marks a significant phase in the country’s transition from fear to freedom and from tyranny to democracy.

The fact that these buildings feature so prominently in an architecture tour of Phnom Penh says something about their historical interest, not to mention what it says about the resilience and adaptability of human beings.

It makes you wonder how the priests and monks who once served here would feel about the way their places of worship are now being inhabited.

There’s a long history of both religions providing shelter for the poor and homeless – just not usually quite this front and centre. 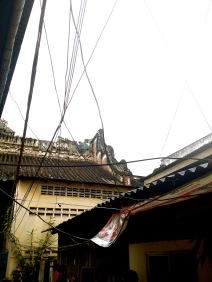 My first glimpse of the roof of the Jade Mountain Temple. Built in the 1930s by Hokkien settlers, the temple was overtaken by squatters after the fall of the Khmer Rouge. 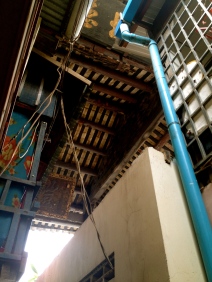 A look upwards between the squatter houses at the ceiling of the former Jade Mountain Temple, with its distinctive slatted structure and huge plaques bearing Chinese characters. 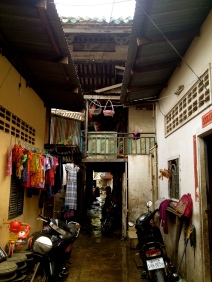 Squatter homes lined up under the Jade Mountain Temple roof. 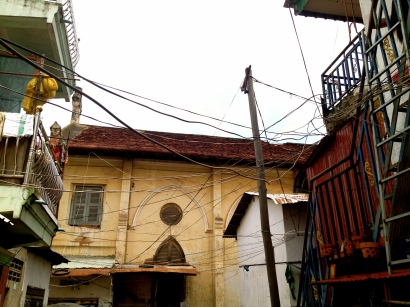 The Sisters of Providence church has gradually been consumed by the surrounding neighbourhood. 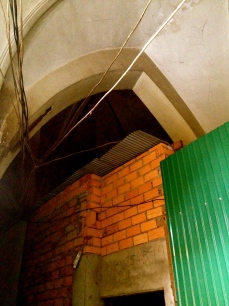 The distinctive lines of the original church architecture are still visible above the walls of the squatter homes which have been built inside. 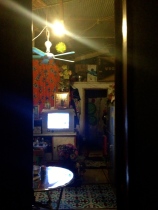 A glimpse in the door of one of the homes that now occupies the inside of the church. 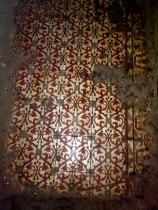 The floors in the old church have been devoted to many different uses over the decades. 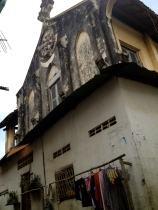 Local life, including getting the washing dry, goes on underneath the former church. 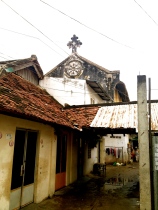 From this angle, the historic building might be mistaken for a working church. 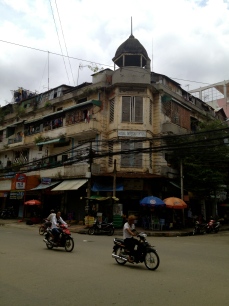 Built circa 1905, the Hotel International building in Phnom Penh was taken over by squatters in the years after the downfall of the Khmer Rouge in 1979. Like many buildings during this period, squatters built shacks across the rooftop which are visible in this picture. 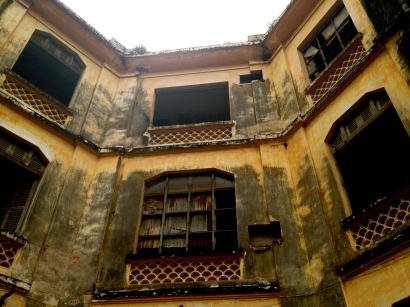 The former police headquarters in Phnom Penh, built in the 1930s, and now derelict. 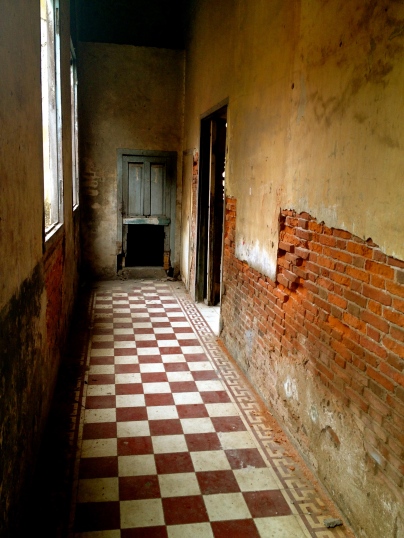 A charming corridor in the former police headquarters. 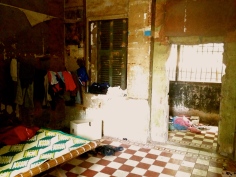 There are a couple of squats in the derelict old police headquarters building. 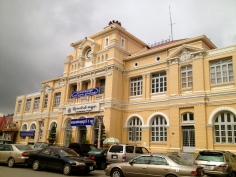 The Post Office in downtown Phnom Penh is a well-preserved example of French colonial architecture from the early 1900s. 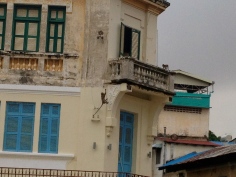 Formerly the Hotel Manolis, this building opposite the Post Office now houses about 100 families. The building was taken over by squatters after the Khmer Rouge lost power. As well as squatters, there seem to be a few resident monkeys! 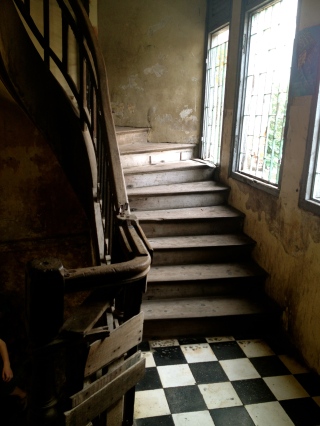 The historic former Hotel Manolis is falling into a state of disrepair. 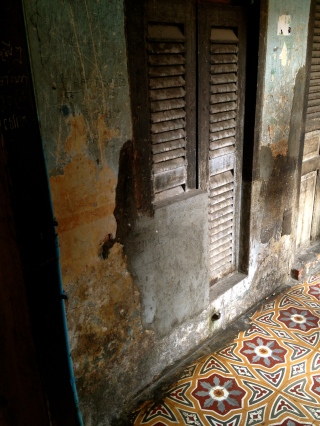 A section of wall with original shutters and floor with original tiles inside the former Hotel Manolis that show the wear and tear on the building over the years.

4 thoughts on “Whenever you need shelter”