Something my Dad used to say after he retired has come back to me lately for a couple of reasons.

He used to laugh about the word ‘retired’ and say that he had never worked so hard in his life.

That was very true. On retirement he took up running a 100-acre farm. He had herds of cattle, sheep, horses and kids – four of us still at school – to look after with my Mum.

Dad’s words have come back to me as I write his story, but also as I’ve thought about what it means to be out of work.

When I visited a financial planner the other day, several times he referred to me as being ‘in transition.’

It gave me a mental picture of someone, heavily pixilated, as they were shot via transporter beam from one job to the next. In that moment of transition the person was in neither job, so it was like they didn’t properly exist.

I shared this anecdote with a recruiter the other day and she told me their preferred terminology was ‘between jobs.’

In both cases, they use these terms to be less confronting to those who are having difficulty with being unemployed and for whom that word feels scary or depressing. That’s a very worthy reason.

However, neither of these terms works well for me and I’ve experimented with different ways to describe my circumstances.

Initially I spoke a lot about being ‘redundant.’ I’ve also referred to being on ‘career break’ or on ‘sabbatical’ and these are perhaps most fitting, but I’ve also made a deliberate decision to get comfortable with the term ‘unemployed.’

Why? I’m a public affairs person who believes in the value of speaking plainly and honestly. Also, if I own it, no one else can hurt me with it.

At the end of the day, they’re all simply words and they only have the meaning that we bring to them – like Dad and the way he redefined retirement.

I’m happy to think I’m following his good example, as friends tell me I’m bringing new meaning to being redundant/unemployed.

After an intense period of travel and volunteering, I’m now working full time on my writing, as well as doing some courses and keeping up my singing, blogging, photography and other pursuits.

I’m not getting paid for it and as other friends in the arts have quipped: ‘welcome to the creative life.’

My first project was to publish a hardback book of the stories and pictures from the trip to Mauritius with my friend and her family. I couldn’t talk about that personal book before now because I wanted it to be a surprise thank you present for my friend’s parents.

It was that book about aspects of their family history which gave me the impetus to finally start writing about Dad. I’ve developed a draft structure for his book and I’ve written more than 6,000 words so far.

Because that’s such a big project, with a lot of research and interviews to be done, I’ve got a few other short-term projects on the go as quicker wins.

People can fear the loss of their job title, but being liberated of mine has reminded me:

• People relate to you more when you share vulnerability
• Most people have been made redundant at one time, or they know someone who has been, or they may fear losing their job in the current environment
• People like to talk about it and they like to hear that it can be a positive experience
• People are less interested in titles than they are about what you actually do – at work or outside work
• If you do things outside work – whether it’s your family, a sport, a creative pursuit, volunteering or another activity – you can lose your job without losing your whole sense of identity

I can understand there are people who feel the terms ‘between jobs’ and ‘in transition’ are right for their circumstances.

The reason they don’t suit me right now is because they deliberately put all the emphasis on where you’ve come from and where you are going.

It’s important to work on those things, but there’s something else I learned from both my parents about living a happy and fulfilled life. Give some focus to where you are right now and ask yourself: what am I doing to make the most of today?

This gallery contains a series of photographs of street art taken in Sydney. While the photos are mine, they only serve to capture the artistry that belongs to the people who have created these incredible works of urban art. It felt like fitting imagery for a story about pursuing a creative life.

This one totally blew me away. It’s huge, detailed and conveys incredible emotion. 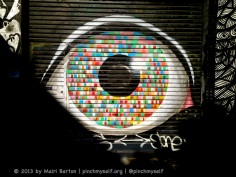 The reflection spot is actually part of the art, not a reflection on this roller door.

This cave man lurks in a little alcove behind another building. I love the way the artist has been able to continue the work right across the doorway so effectively.

This one wraps around the corner of the building and keeps going. 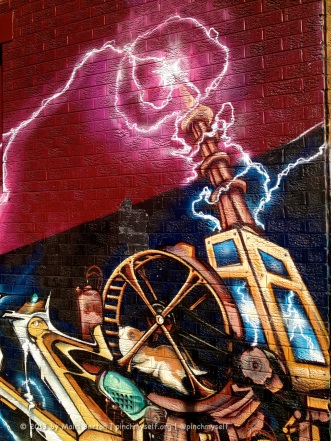 The little hamster on the wheel is generating a big bolt of electricity that feels like it is leaping off the wall.

An evocative image of what feels like a ghost ship. Can’t believe how three dimensional the wheel seems.

This one, depicting the Hindu God Ganesh, adds a multicultural element to street art. 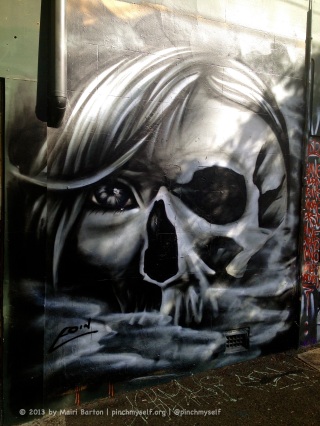 The old chairs in this photograph, on display from a neighbouring second-hand shop, become part of the colour of this pirate piece. 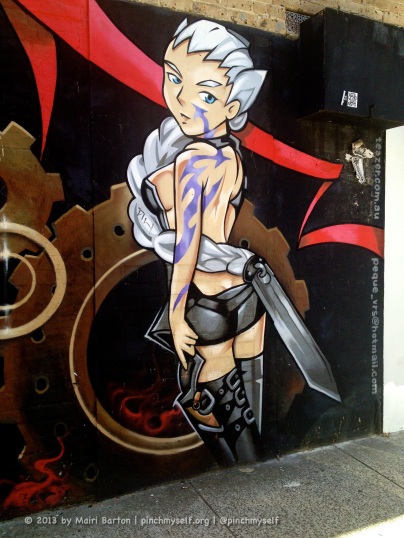 A gun and sword-wielding female super hero lurking in the laneway just in case she’s needed by the nearby cafes and shops.

These ferocious looking guys are painted on the gates of someone’s suburban driveway.

Amazing cartoon-style piece of fighter jets battling it out.

8 thoughts on “Make the most of every day”